The Value of Consensus Currency Forecast

The Value of Consensus Currency Forecast

There is a widespread pessimism about the forecasting ability of standard fundamental-based exchange-rate models. The empirical literature on nominal exchange rates shows that the current exchange rate is often a better predictor of future exchange rates than a linear combination of macroeconomic fundamentals. This result is behind the Meese-Rogoff (1983) puzzle. Engel and West (2005) offer an explanation: the exchange rate could be arbitrarily close to a random walk if the fundamentals have a unit root and the factor for discounting future fundamentals is close to one. These findings render any attempt to forecast exchange rates dubious.

Rossi (2013) summarizes the out-of-sample exchange rate predictability literature since the 1970s. She argues that whether exchange rates are predictable depends on the variables included in the model, the specifics of the model framework and the forecast evaluation method. An important conclusion of Rossi (2013) is that no model can beat the random walk consistently, across all countries and time periods.

A natural extension to this debate is to question whether market participants themselves can better forecast future exchange rates or do they perform worse. Given the probable futility and apparent complexity of directly employing macroeconomic factors to predict currency fluctuations, it is quite understandable that many foreign exchange managers might subscribe to an external provider of currency forecasts. These forecasts could complement their trading strategies.

In their survey of foreign exchange rate expectations, Jongen, Verschoor and Wolff (2007) show that survey-based forecasts do not appear to produce statistically smaller forecast errors than a random walk forecast. In the few cases where an individual forecaster generates a more accurate forecast, the information cannot be exploited in the future.

However, Pierdzioch and Rülke (2015) study the exchange rate forecasts made by professional forecasters for emerging market currencies. They find their forecasts often contain statistically significant information with respect to directional changes. Cheung et al. (2018) make the same observation as they show that the direction of change of certain structural models does outperform a random walk with statistical significance. The direction of change forecast allows the possibility that the forecast from surveys could add significant value.

To our knowledge, one dimension that has not yet been covered in the literature is whether consensus currency forecasts can efficiently rank the subsequent currency return. A currency analyst’s main role is to provide valuable advice to their clients. Since portfolio managers usually evaluate financial assets relative to other opportunities, currency analysts could probably do the same. In which case, relative expected currency returns could be more informative than absolute ones. Analysts could encounter difficulties in forecasting the absolute level of a currency but could be good at forecasting the currency rank of return. This approach is close to that of portfolio managers. Blake, Rossi, Timmermann, Tonks and Wermer (2013) claim that when currency investments are part of an optimal portfolio, then an economic criterion which accounts for absolute and relative information could be different from purely statistical criteria.

The second part of this research investigates the main drivers of the consensus forecasts. Considering the cost of building and maintaining large econometrics models and their weak forecasting performance, we show that currency analysts draw on generic trading rules used by practitioners as factors conditioning their currency forecasts.

Our assumption is that currency forecasts are not simply performed to best forecast the currency return but primarily to rank currencies based on their potential returns. As an analogy, on the equity market, experienced portfolio managers focus less on the expected returns of analysts for various stocks and more on which company analysts prefer, which is revealed from the ranking using the relative expected returns and their top picks. Da and Schaumburg (2011) show that a target price relative return could lead to significant excess return. We conjecture that, despite currency analysts not beating the random walk, their ranking of expected currency returns could still be profitable for portfolio managers. For market participants, it would be advantageous to follow currency consensus forecasts if this could translate into higher excess returns compared to the usual strategies.

Currency analysts are aware of what works in financial markets. Sometimes, they learn strategies from the best currency managers or, sometimes, they promote and develop new strategies that will thereafter be used by portfolio managers. Thus, there is positive feedback for strategies used or developed by currency analysts and currency portfolio managers. The assumption of this paper is that currency analysts apply the generic strategies used by the market participants to help them make their forecasts.  To predict exchange rates, we conjecture that forecasters based their choice of factors on the experience by the market participants themselves through a criterion different from the statistical criterion used by econometricians.

To estimate the advantage of following currency forecasters, different generic ‘’long/short’’ portfolio strategies based on characteristics are built and compared to the consensus forecast. To explore the determinants of the consensus forecast issued by analysts, we use a rank-based estimation. Rank-based estimators were developed as a robust nonparametric alternative to least squares estimators.

The surveys of exchange rate and interest rate expectations come from Fx4Casts and Bloomberg. The sample spans from October 2001 to December 2017 for a total of 16 years for 20 currencies. Table 1 displays the basic statistics for currencies.

Successful trading rules developed by currency analysts and academics are implemented for comparison with the returns of consensus forecast and as factors to explain the consensus currency expected rank of return.

The generic strategies are:

The portfolio construction is as follows: each currency is ranked according to a factor. Two portfolios are formed. The "long" portfolio comprises the 4 currencies with the highest loadings and the "short" is formed using those with the lowest loadings. Trading costs are taken into account using the bid/ask spread and we adopt the traditional roll-over strategy used in the market at the cost of a mid-market between the bid or offer and the mid-price.

As seen in Table 2, over the last 16 years, a simple strategy of using the consensus forecast provided an excess return over cash of 5.2%. This excess return is higher than all the other typical currency strategies used in the market. 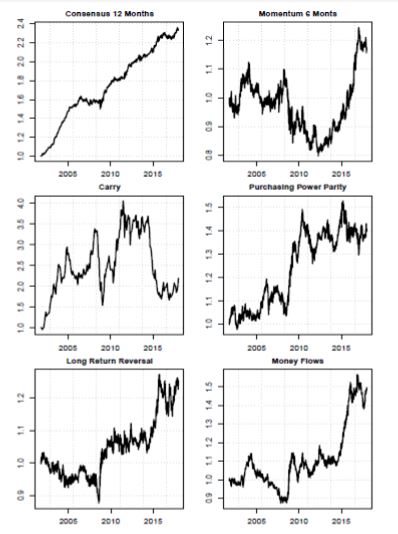 The determinants of currency forecast

We test if the usual generic currency models or factors used by market participants could explain the forecast ranking of currencies. We assume that the currency forecasters use those generic models to help them to form their forecast.

As seen in Table 3, there are striking differences in how analysts determine their expected return. Analysts do not interpret signals for developed and emerging currencies in the same way. 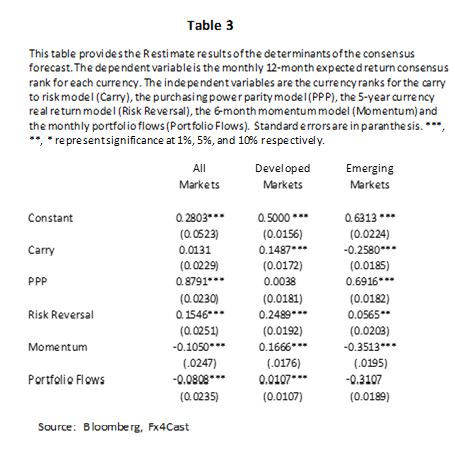 For developed markets, the usual generic trading signals such as carry trade, return reversal, momentum and fund flows are all significant with positive impact. Notably, PPP is not significant. Hence, currency analysts seem to use the generic strategy to help them to rank currencies. Currency forecasters are aware of those anomalies and use them accordingly.

This is not the same for emerging currencies. Above all, carry trade and momentum signals have significant negative impact as the PPP factor is strongly positive and significant. The interpretation is quite different in emerging currencies as the focus is related to the longer-term equilibrium value of a currency as reflected by the PPP strategy. The rise in interest rates is often linked to a troubling economy and a defensive position from the central bank and linked to subsequent large devaluation which could explain the negative coefficient.

The main role of currency analysts is to provide financial advice to their clients. In that regard, we show that currency analysts seem to provide valuable information to portfolio managers. The consensus currency forecast is better explained by a combination of generic trading models.

Pierdzioch, C., Rülke, J.C., 2015, On the Directional Accuracy of Forecasts of Emerging Market. International Review of Economics and Finance, 38, 369-376. 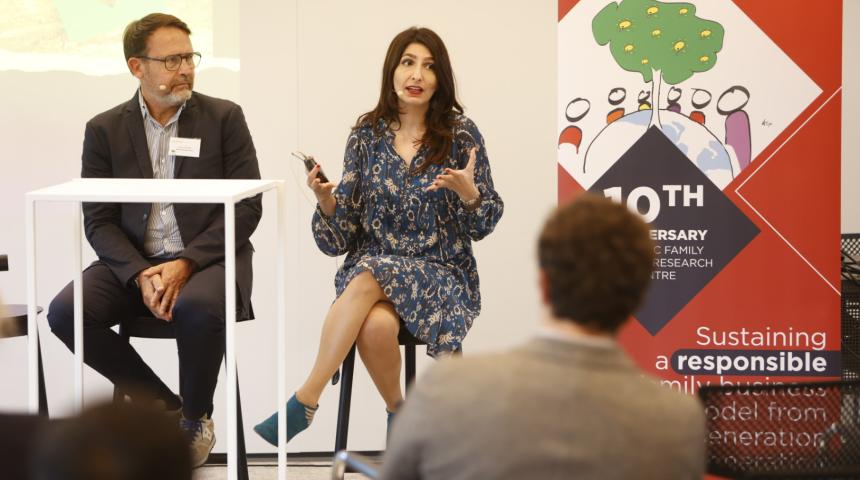 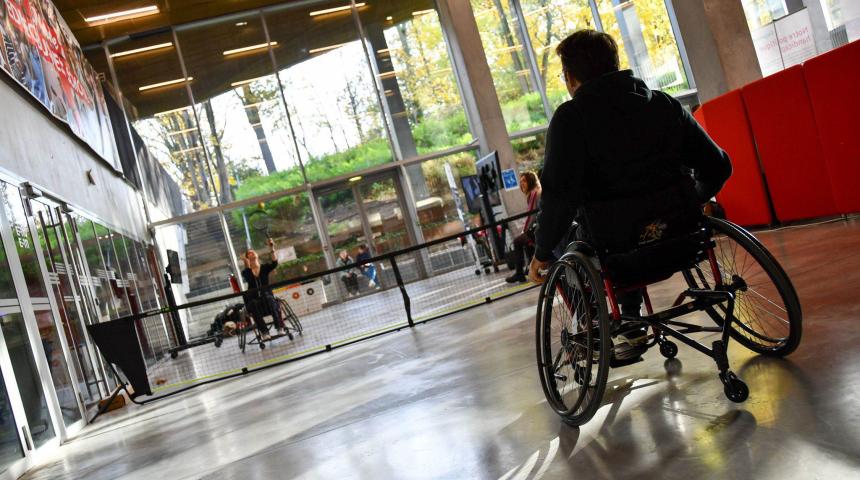